A Showcase of Year 3 Work

Aidan has used his character Boom in a fantastic, exciting tale about hunting a troll on a far off island to help the King! Aidan has worked hard to use the correct 'there/their/they're' and has used clauses to make complex sentences, well done!

Stanley's Ancient Greek mythical character is Libbles, who gets vengeance on ANYONE who starts a forest fire as he is the protector of forests! Stanley's clear description tells us all about the character and I can't wait to see what Libbles does next... Well done for making a real Greek vase out of clay too!

Can you follow Erin's recipe to make these yummy Greek feta pies that she researched and cooked?

Well done to Aidan for working hard to find lots of right angles, obtuse and acute angles in these boats- how many did he get? He has also carefully decorated a vase according to the traditional Greek style!

Can you name the bones on a human skeleton?

Greek Vases by Elspeth and George

Here are vases designed and decorated by Elspeth and George- they both used traditional colours and patterns for their vases, and Elspeth used a scratch-off technique to get her design. We would love to see everyone's designs!

Here is Aidan's great Literacy work where he created his own mythical character which is part human, part bull, part tiger and part lion... it sounds like he'd fit right in an Ancient Greek myth or legend! I can't wait to see what Aidan's character does next.

Well done to Josue for completing his work on 'angles'. Keep up the wonderful work.

Caring for our world!!

Another great RE poster about 'caring for our world' by Harrison. Thank you Harrison - Such an important message.

As you can see Eban has been very busy. I particularly loved his RE poster about 'caring for the world' - It was a powerful image. You can also see that he has also completed his work on fractions, money, skeletons and Odysseus and Cyclops. Keep up the good work Eban!!

Well Done Angelina for your descriptive work last week on Odysseus and Cyclops!!

Well done Hector for you drawing and description of a Griffin. Hector also drew, Captain Rex’s helmet from Clone Wars, which Hector is enjoying watching at the moment.

Jasmine has been very busy at home this week! She has done some baking with her brother and also finished her fantastic storyboard. Do you know which Greek myth she is re-telling? Well done Jasmine!

What did the Ancient Greeks eat?

Boxing in the Olympics in Ancient Greece

Nicole was inspired by both Medusa and the Cyclops when creating her mythical creature! She also has done lots of research and put it all on her research map, including research around Ancient Greek fashion, well done Nicole.

George carefully wrote this paragraph about a mythical creature, using great adjectives to describe it. Do you think you could draw George's beast based on this description?

Make sure to check out George's research and presentation on a jaguar's diet and nutrition! He has included lots of important information as well as some surprising facts!

Bay has been doing her maths work on money this week, working hard to convert pounds to pennies and add money together.

Aidan has learnt about Odysseus and the Cyclops and written detailed comprehension answers about the story- as well as drawing and labelling a very scary cyclops! Well done Aidan.

Bay has made some Greek food including hummus, with the recipe attached if you want to have a go, lamb and mint burgers and a feta cheese salad. Yum! Bay has worked really hard on her spelling at home too, well done Bay!

Bridget researched Ancient Greek food and nutrition with her dad, then made some delicious food and created a Greek menu featuring all the dishes!

Find out more about the Greek Olympics by reading through Eban's fantastic powerpoint.

Theseus & the Minotaur - by Lizzie

Maryam made this story using holiday pictures from a few years ago. It is about Ancient Greece, as told by three cats from Athens! Well done Maryam

Well done to Phinehas who has been working hard on his Maths this week! He has been answering lots of questions on fractions. Have you had a chance to look at the Oak National Academy lessons on fractions yet?

Check out the wooden model of a Parthenon Angelina has been busy building. She had some help from her Dad who is a carpenter, but she still did lots of the tricky bits herself! Well done Angelina- this is a fantastic project you should be very proud of.

Farrah has made some fantastic Greek pillars out of clay with her Mum and brother. Click the link to see some brilliant pictures! Well done Farrah

A great book review you have written Minna! It might encourage somebody else to read it too.

On the weekend Maia found some wild garlic in Norwood park and made some yummy pesto with her mum using the garlic- how delicious!

Eban drew a mythical creature called the Chimera. He has also managed to write his name in Greek letters - Well done.

The last picture is very interesting! It is a picture of when Eban went to Turkey on holiday 2 years ago, he visited a mountain where a creature was said to have roamed. To this day, eternal flames come out of the ground. How interesting!! Thank you for sharing Eban.

A big thank-you from George

George has drawn and coloured this wonderfully detailed poster of lots of important charities' logos to say thank-you for all their hard work. This was part of the R.E work last week, well done George! What other charities shall we say thank-you to?

Krystal has been doing a wide range of activities at home, including making salt dough and experimenting with making handprints and letting it harden, improving her spelling and handwriting, learning the 4x tables really well and practising 3d addition! She also sent in pictures of her incredible Stone Age costume that she made before Easter. Doesn't she look fierce and strong!

Zeus! King of the Gods and sky!! by Dylan

What a wonderful poster of Zeus! Well done Dylan. I love your drawing too.

A selection of wonderful work based on our Ancient Greece topic! By Callum!

What an interesting family tree this is!

Nutrients found in food! By Angelina

Angelina is also keeping a nutrients food diary too. Take a look above.

Carter and Lola have been busy planting very tall plants... does anyone recognise what they have planted? Carter has also been progressing really well in his maths work, as well as enjoying cuddles with his furry friend.

George has written all about the different styles of Greek columns, and has drawn them carefully with lots of detail. Well done George!

Teo's Teotaur and other mythical creatures

Teo has created this interesting collage of his favourite characters from Ancient Greek myths and legends. He has also created his own character, the 'Teotaur'. Teo says: 'The Teotaur is Typhon’s cousin and has very stretchy tentacles, he’s very dangerous and his claws are as sharp as knives!'

AM has been caught reading!

Who can tell what type of book AM is reading? He looks very cosy, especially with his cat companion!

Tommy has been busy building lego and he has created the Parthenon as part of our Ancient Greece topic! Does anyone know what the Parthenon was used as?

Is anyone else a bit scared of Stanley's mythical beast, the 'Snagon'? What about Eoin's Minotaur named Jeff?

They have researched some mythical creatures from Ancient Greece and Stanley has created his own, whilst Eoin has taken inspiration from the beast in 'The Labyrinth' story.

Take a look at Teo's maths work... he has remembered everything we learnt about division and fractions from last term, well done!

Stanley has completed the Catch Me Reading challenge...the aim of which is to find unusual or cosy spots in your home to read a book, take a photo and send them in to us! We have had some great entries, thank-you Stanley for yours. Can you spot what Stanley is reading? I think a see a range of reading material, including a non-fiction book and a comic!

Angelina looked through the powerpoint about Ancient Greek architecture and found they used different types of columns for their buildings. She drew them and labelled them with information - Well done Angelina :)

Kirpal has been working hard using the booklets we sent home as well as the online learning. Here is some great grammar work on prefixes and adverbs and you can see how well Kirpal has been practising his 4x tables!

Olivia has planted lots of seeds in her garden, such as forget-me-nots and pansies, and written an account of what she did. She also created a beautiful fairy garden and wrote all about what she put in it!

Bay worked with her family to create this funky board game. The squares have all sorts of events on, can you spot any that have happened to you? Would you like to play Bay's game?

Aidan has sent in a great array of work where he has worked hard on determining nouns and verbs, as well as working on his number-ordering skills, and has written some intriguing work about Pandora's box! Make sure you give it a read.

George has watched some animal live cams and drawn pictures of some animals. He has included some fascinating facts- did you know that a giraffe's tongue can be 45cm long? He has also written a very knowledgeable similarities and differences chart comparing animals and plants.

Lewis and his brother have planted sunflower seeds. I wonder how tall they will grow? 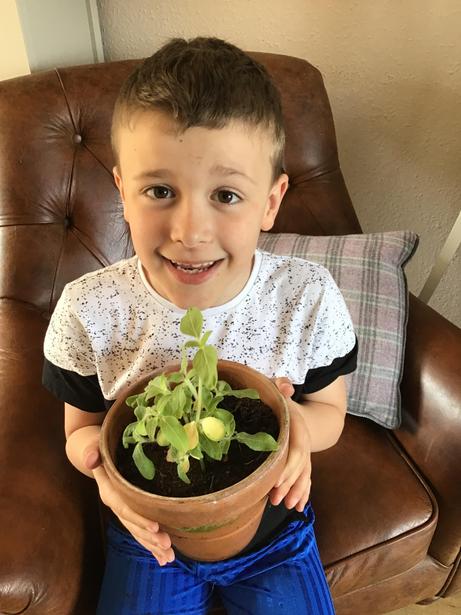 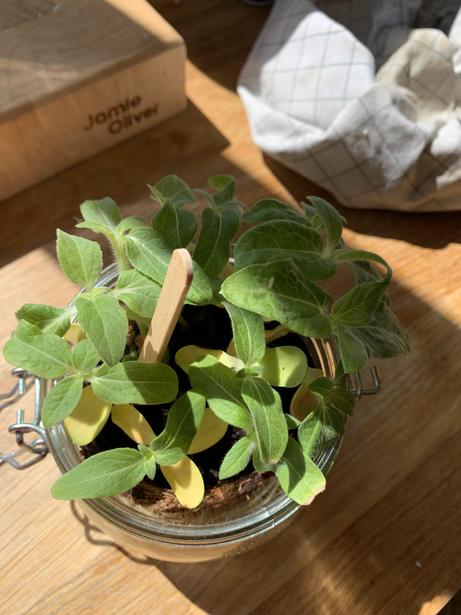 Hamish has been very busy!

Well done Eban! He has been really busy at home with his writing! We are really impressed with the work he has done. I was particularly pleased to see that he has been remembering to include inverted commas to mark direct speech in his story.

Jade class have been very busy with  the start of their new topic Ancient Greece. LW has written his own story called The Pharoah's inspired by The story of Icarus. Well done LW.
Top
Cookie information
Cookie Notice